Project OASIS (Optimizing Aquaponic Systems to Improve Sustainability) is the name of a research project started in January 2016, by a group of engineering students at the University of New Hampshire. The goal of their project is to “develop an energy efficient, sustainable hydroponic system that will provide the food insecure with a source of local nutritious food.” These students have been collecting data and discussing their plans for this project since their freshmen year at the university, and are now working with UNH’s College of Life Sciences and Agriculture, along with the New Hampshire Agriculture Experiment Station at the Macfarlane Research Greenhouses on this research.

The project was kicked off when four engineering students, Paige Balcom, Siddharth Nigam, Will Taveras, and Allison Wood made plans to create a sustainable aquaponics system down in Honduras. Unfortunately the plans for Honduras fell through; however, the students found a new location in Costa Rica with the help of Professor Andrew Ogden. The students traveled to Uvita, a small community in Costa Rica, during their winter break in January 2016. The students chose this site as a model for a community that does not have the resources to produce or access fresh food. This community’s land lacks the fertile soil necessary to grow vegetables, and the cost of food continues to increase. It’s also prohibited to fish on the coastline in this community because the land and ocean are part of a National Park which does not allow fishing. The aquaponic system that the students plan to build in this community could potentially provide both fresh vegetables and a source of protein for the people, creating a more secure food system. 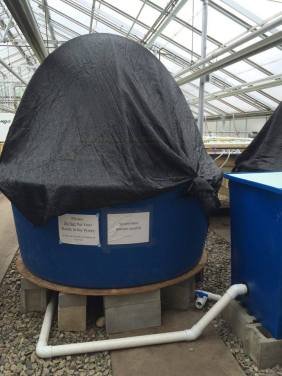 During this initial visit, the students visited the community, collected site data, and spoke with many members of the Uvita community who are interested in helping with this project. After returning home, the students quickly got to work on the construction of the model system and the scalability of the system considering the site location. The students are working with Dr. Todd Guerdat, Professor Andrew Ogden, and several other UNH students in the Macfarlane Research Greenhouses. Their goal is to build a sustainable aquaponics system that is economically and environmentally feasible in the Uvita community and potentially many other communities around the globe. The system has been up and running in the greenhouses since March, and further testing is being done to review its efficiency and potential. 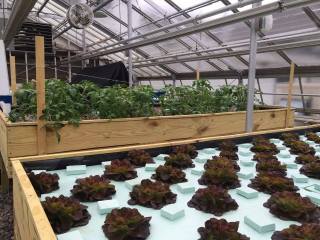 Project OASIS has received funding from their third place finish in the student category at the Social Venture Innovation Challenge, as well as from the Ocean Engineering Program, and a grant from Emeriti Council. The UNH Peter T. Paul Entrepreneurship Center also awarded the team a Summer Seed Grant. The team is excited to head back down to Costa Rica this summer to build the system for the Uvita community. Although the originators of this project are seniors, many other students have shown interest in continuing their research in upcoming years. Dr. Todd Guerdat and his team will continue to research these aquaponic systems with a goal to integrate agricultural systems in order to maximize nutrient recycling and resource management.
For more information and updates on the project, visit Project OASIS on Facebook!
https://www.facebook.com/ProjectOASISUNH/